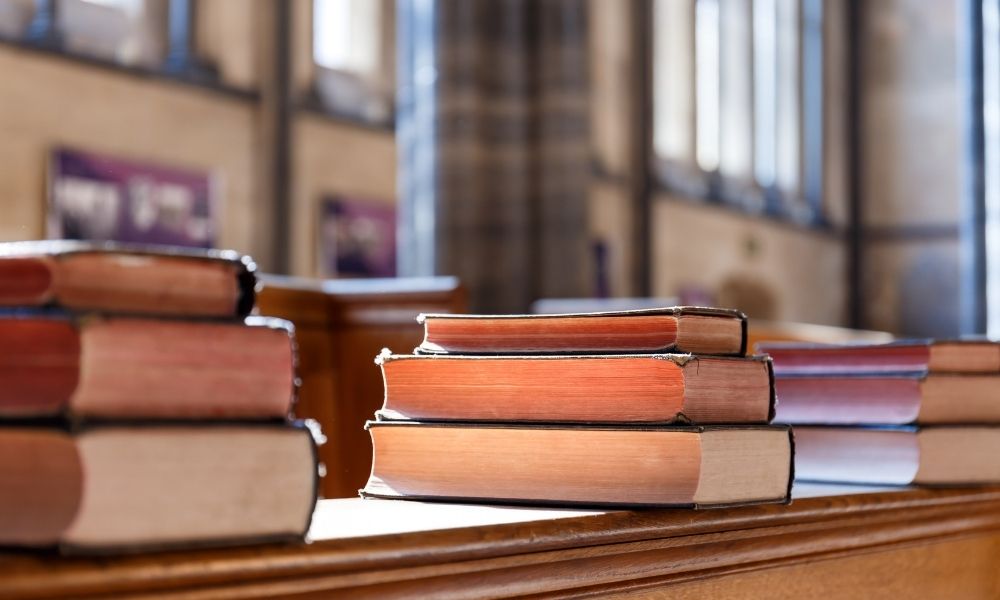 The complete Christian Bible has been translated into over 700 living languages. If one were so inclined, one could read the Bible in English, French, Korean, Persian, or Navajo, to name but a few. Avid Star Trek fans are even attempting to translate the Bible into Klingon. Within the English language alone, there are over 400 translations of the Bible, all with varying degrees of popularity. Amid this crowded marketplace, however, one edition stands above the rest: the King James Version, the first authorized version of the Bible in the English language. Since its 1611 publication, many Christians have found this translation, with its almost Shakespearean elegant prose, to be the definitive work. There are several reasons why the King James Bible is cherished among Christians to this day. You may agree with a few, or all, of these.

The English Language, Dressed for Success

As if it’s something we haven’t been thinking about every day for the past year, let’s think for a minute about the phenomenon of working from home—particularly how we dress for the occasion. On those days where we’re not under the watchful eye of a Zoom call, it can be tempting to underdress for work—roll right out of bed, skip the shower, and take our familiar spot at the desk, completing the day’s tasks in a ratty old sweatshirt and pajama pants, if that.

Some people thrive in maximum comfort. Others have found that all those old bromides about dressing for success and looking good to feel good were true after all and that comporting oneself with a sense of formality is necessary to do the job with pride and professionalism.

Many Christians feel the same way about their religious texts. One could easily use a translation of the Bible that reads as breezily as a chat between friends. However, rendering a serious message in plain language can sometimes feel like the theological equivalent of showing up to your law practice in gym shorts. Consider what you lose when you translate Ecclesiastes 9:11—the race is not to the swift nor the battle to the strong—as, “Sometimes you lose when you should win because, I dunno, life’s kinda like that sometimes.”

Serious religious observance dictates a serious approach to the English language, and the King James Version offers the high register that confers the proper gravity upon one’s Bible study.

The Translational Integrity of Formal Equivalence

The seriousness of the English language in the King James Version is not simply a matter of feeling appropriate. There are also real theological implications to how translators bring the Bible into English from its original Hebrew and Greek.

When James VI & I convened his kingdom’s most talented theologians to translate a fully authorized Bible into English, they did so by using an approach known as formal equivalence. In formal equivalence, translators seek to complete a word-for-word translation that is as true to the original text as possible. Other Bible translations use an approach called dynamic equivalence, in which the goal is not a word-for-word translation but a “thought-for-thought” version that can sacrifice many of the nuances of the original text to create a more eminently readable paraphrasing.

However, if you believe, as so many Christians do, that the Bible is the divinely inspired word of God, then any translation from its original languages must be as true to those words as humanly possible. An entire branch of study, known as hermeneutics, dedicates itself to rigorous interpretations of religious and mythological texts, and within it is a pitched battle between formal and dynamic equivalence. However, most anglophone Christians believe in the primacy of word-for-word integrity, and it shows in the continuing predominance of the King James Version among readers.

Reading the Bible brings family members together—not just within a nuclear family but across generations as well. For this reason, it’s important for everyone, young and old, to be literally on the same page. Most alternative translations of the Bible in use are of far more recent vintages than 1611, with the New International Version, the second-most popular translation, dating back to only 1978. Even then, the NIV did not gain mainstream purchase immediately. Your parents and grandparents most likely learned, studied, and continually revisited the pages of the King James Version, and to read what effectively amounts to a different form of scripture would put you out of step with them.

The reasons for continuity are practical but sentimental, too: reading the same King James Version that your parents and ancestors read can make you feel like part of a lasting tradition. Even while the rest of the world changes around us, the beautiful prose of the King James Version will endure as it has for centuries.

More Than Just a Translation?

One interesting albeit quite unorthodox reason why so many Christians continue to hold the King James Version dear is the belief that the translation that took place in advance of the KJV’s 1611 release represented a divine inspiration. This school of thought is better known as “Ruckmanism” in honor of its key proponent, Baptist minister Peter Ruckman.

According to this belief, the translation of the King James Version was an “advanced revelation,” one that corrected any possible errors or ambiguities in the original Greek of the New Testament. Ruckman was a passionate advocate for the King James Version—one whom other Biblical scholars have felt occasionally crossed boundaries of decorum in making his arguments.

While Peter Ruckman himself may not be a household name, and non-English-speaking Christians may have something to say about the Anglocentric notion of only one language’s translation receiving an additional round of divine intervention, there’s little doubt that his arguments for the exclusivity of the King James Bible have informed the way Christians think about Bible translations.

Annotate as You Read

Whether it’s for truth or tradition, the King James Bible is cherished among Christians as the best choice of translations. That said, discovering this truth and following this tradition is not always easy when reading 17th-century English. That’s why The KJV Store offers wide-margin Bibles to facilitate note-taking as readers work their way through the high, sometimes challenging, but always rewarding prose of the King James Bible.